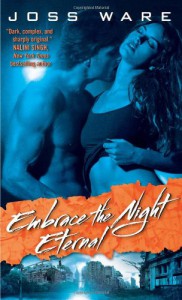 What a difference one book can make! After lukewarm feelings for Beyond the Night, I wasn't sure I wanted to read this book... especially since the lead character, Simon, didn't really spark much interest for me. But I'm really glad I did. Unlike the first installment in the Envy Chronicles, I felt real emotion for the characters --a connection I just didn't have the first time around.

The concept for the series: the world is 50 years past a near-apocalypse. Many of the survivors are living in what was once Las Vegas, NV, which is now called N-V or Envy. Creeping around at night are killer zombies called gangas... and pulling their strings are the nefarious Strangers, people who were once human, now made immortal by implanting special crystals in their bodies. It is likely they were behind the "Change" that sent the Earth into near ruin. Five men from 2010 now find themselves in this new world. They had gone exploring in an AZ cave and went into a kind of stasis for 50 years, awaking only 6 months before the events of the story. They had not aged, but instead came out stronger, each with a unique ability.

Simon was a crime lord's bodyguard in his old life. But he sees the Change as a chance to become a new man. He is attracted to Shea, a quiet computer whiz and member of the Resistance, trying to bring down the Strangers. But he thinks she is in a relationship with another man, so he refuses to pursue his feelings. Sage is something of an outcast in Envy, because she comes from a settlement that's like a breeding camp. She and Simon end up teaming up to infiltrate her old town to learn more about the one of the leaders of the Strangers. While they're there, it gets harder and harder to fight their growing attraction.

I really liked Simon. He's one of those men with a dark past and hopelessness about the future --but deep down he is a really good guy, worthy of love. I loved watching him fall in love with Sage and each time they get closer to acting on their feelings, the story gets hotter and hotter. This was a huge improvement over the last book and I'm sorry to see it end. Here's hoping the next book will be as good! 4 1/2 stars.