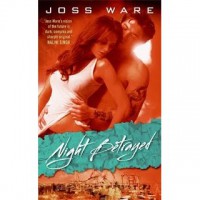 Imagine living 78 years; surviving a near apocalypse; seeing your world fall prey to zombies; watching your twin age... all while remaining an attractive version of your 30 year-old self. That's what happened to Theo. He's a computer genius, one of the leaders of the Resistance against those responsible for ravaging Earth. And while surrounded by friends, he's still alone, isolated by what makes him different.

But things change when he meets Selena. She is a strong and special woman, who doesn't look her 50 years of age. But she is very aware that she is (or rather, appears to be) much older than Theo. He is delivered to her, nearly dead from a gunshot wound. But instead of leading him to the other side, as she has done for so many, she manages to bring him back to life. Selena can see death coming and guide souls to the beyond, but what most people don't know is that she also feels she needs to save the souls of the zombies now roaming the land... even at great risk to herself.

I wasn't sure how I'd feel about an older heroine. Frankly, it's unusual enough to have a female lead that's my age, much less one only a few years younger than my mom. But for Theo, it makes sense. He's 78 for crying out loud. And Selena is a great fit for him. Their sex scenes are steamy... and we manage to continue with the series arc detailing the planet's "Change" and the orgins of the zombie gangas.

There are some upsetting parts of the book that I didn't see coming... namely an unexpected death, which made me cry. And the rape of a female character, which was (thankfully) wasn't too graphically detailed, but disturbing all the same.

A solid installment, one I enjoyed more than I expected. Check out the earlier books in the Envy Chronicles if you haven't already. 4 stars.