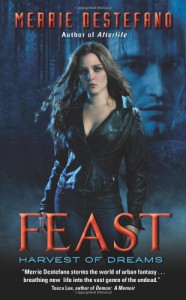 Maddie is a writer, recovering from a painful divorce and a bad case of writer's block. She returns to a small town where she vacationed as a child, hoping to find her muse. When she arrives, with her son and the family dog in tow, her imagination begins firing again almost right away.

Ash is thrilled that Maddie has returned. He encountered her when she was a child and recognized her vast creativity. He didn't claim her then, but hopes to correct that now... just in time for the impending hunt. Others of his kind are coming to join him, and he finds his heavy spirit lightning a bit, despite the heavy curse he has carried since the death of his wife. But one of his visitor has nefarious plans... and as treachery unfolds, it will change everyone's life forever.

If I managed to translate the story in any way that makes sense, I feel like I've earned some kind of reviewer merit badge. I spent almost the entire book at least half-way lost. I'm sure the author was trying to let the details come forth as the story unfolded, but I'm a bit partial to having more than a vague idea as to what is going on in the book I'm reading. For at least half of the book, I didn't even know if Ash was the hero or villain; whether he was a love interest for Maddie or a threat to her. I had no idea what the hell he was supposed to be. And frankly, when I found out, I was... underwhelmed. (On a side note, I also have to mention there were too many narrators, and the perspective changed with each of the 90+ chapters.)