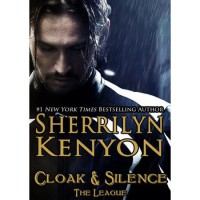 I feel like I have been waiting forever for this book. It's been more than a year since I read Born of Silence, and despite the elapsed time, my enthusiasm has never waned about seeing Maris and Ture's story. I will say this, League fans, be sure you've read that book before reading this one or you will be spoiled to high heaven.

This --to the best of my knowledge-- is Sherrilyn Kenyon's first stab at m/m. And I have to tell you, it feels just like any one of her m/f romances... only you get two tortured heroes instead of just one. Two men who have known nothing but betrayal and derision. Two men who have never been loved. Essentially, you're doubling the Kenyon effect. For fans, it's really win-win.

The story begins at the same time as the events roughly 3/4 of the way through Born of Silence, only it's told through the eyes of Maris and Ture. It starts with Ture and Zarya being tortured by the League and follows the events through their rescue and recovery. Zarya was already trying to hook Maris & Ture up, and their connection was real from the very beginning. Neither thought they could make a real go of it, though. Maris was too in love with Darling and Ture was too tied up in his work. Yet, the more time they spend together, the more they are unable to ignore their growing regard and attraction. And before they know it, they fall in love and their walls come crashing down.

There are problems, of course. Their emotional scars run deep, but the external threat is serious. There is a huge target on Maris' back, which means danger for Ture by extension. And there is the Darling-factor. Maris fears his love for his best friend will forever keep him from a real relationship. But there is really no doubt that each man has finally found someone who would never hurt or betray him.

As for the sex... it's pretty on par with the heat level of other League books. For m/m fans, there is a noticeable absence of prep/ lube and Kenyon straddles the line of being mostly clear in what's happening. The lube issue notwithstanding, I was generally satisfied and I think most readers will be too.

Overall, I enjoyed it, though it was a bit predictable. It was also a little over-the-top at times, with lines like: "Tell me what it's like to be held by someone who really loves you" and "I can't be hurt anymore. I am tired of it." Like I said before, it's pretty standard Kenyon, but maybe a little more pronounced because of the double-hero factor.